Contextualizing the Influence that Cultural Diversity Exerts on Team Processes and Team Performance: A Cultural Intelligence and Media Richness Perspective

Contextualizing the Influence that Cultural Diversity Exerts on Team Processes and Team Performance: A Cultural Intelligence and Media Richness Perspective

GVT, i.e. individuals with different cultural backgrounds collaborating in dispersed work groups are becoming part of daily business in industry and higher education (Klitmøller & Lauring, 2013). Past studies have contributed to understanding the impact that cultural diversity asserts on the performance of these GVT (Stahl, Maznevski, Voigt, & Jonsen, 2010). Cultural Diversity is assumed to negatively affect communication effectiveness and social integration, and to increase the number of conflicts. Results, however, do not unambiguously support this notion. Hence, we need to unravel the processes through which enablers, such as structures and capabilities can contribute to producing positive outcomes at the individual, group and organizational levels (Stahl et al., 2010; Stahl & Tung, 2015). This will ultimately provide knowledge on how managers, and their organizations can effectively create performing and satisfied teams.

On the side of capabilities, we believe that the concept of cultural intelligence (CQ), popular in psychology and human resource management (e.g., Ang & Van Dyne, 2008; Leung, Ang, & Tan, 2014; Andresen & Bergdolt, 2016), that received first recognition in IB a decade ago (e.g., Johnson, Lenartowicz, & Apud, 2006) is among these potential enablers (e.g., Fang, Schei, & Selart, 2018, in-press). CQ is the ability to succeed in a cross-cultural environment through (meta-)cognition, motivation, and behaviors (Ang & Van Dyne, 2008). Past empirical research shows that these CQ facets predict relevant outcomes (Schlaegel, Richter, & Taras, 2017) such as job performance (e.g., Ang et al., 2007). Yet, we lack an understanding of the processes through which they impact on team performance. Answering the question, whether and how CQ contributes to positive team outcomes in culturally diverse virtual teams will be our first research focus area. 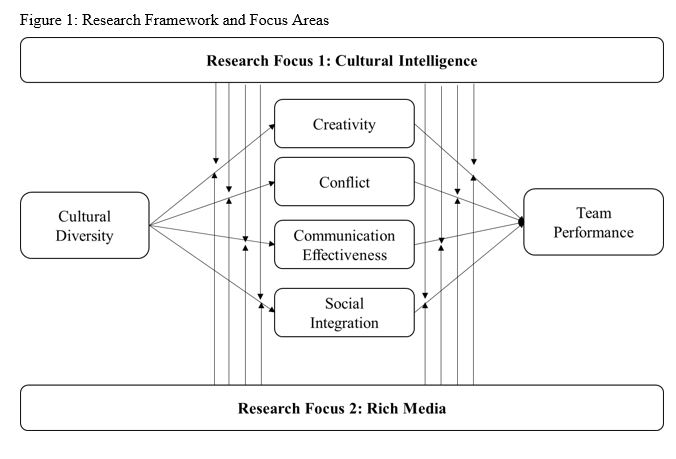 Cultural diversity may influence team outcomes in opposing ways: Similarity-attraction theory (Williams & O’Reilly III, 1998) posits that individuals are attracted to teamwork with those who have a similar cultural background. The argument from social identity and categorization theory (Tajfel, 1981) is that individuals tend to categorize themselves into groups that they favor, and categorize others as outsiders. What follows from the two is that cultural diversity in GVT will have a negative impact on their performance, as it aggravates social processes (e.g., due to different priorities and responses to stimuli) (Wiersema & Bantel, 1992). In contrast, according to information-processing theory, cultural diversity broadens the range of perspectives and increases the information processing capacity of GVT. What follows is an improved problem-solving, higher creativity and innovative solutions (Ancona & Caldwell, 1992; Doz, Santos, & Williamson, 2004). Neither of these relationships is fully supported by past research, nor is the further translation into performance. There is some evidence that team conflict decreases performance – yet, task conflict may even have a positive effect on performance (Jehn, Chadwick, & Thatcher, 1997; De Dreu & Weingart, 2003). We argue that CQ and rich media are enablers that mitigate the process losses from group thinking and similarity attraction and that promote process gains from increased problem-solving and creativity. Hence, we contribute to understanding the mechanisms through which cultural diversity can be positively translated into high performance in GVT: While Stahl et al. (2010) conclude that cultural diversity can be both an asset and a liability of teams, we will contribute to understanding when and how to create an asset out of it.

To generate findings on the above research questions, we will make use of the x-culture dataset, more specifically of the 2018 data collection. We have (re-)designed several questions in the survey to be able to appropriately operationalize the constructs depicted in Figure 1. The dependent team performance will comprise measures related to ratings of the reports by reviewers and might comprise either as a part of the construct or as an additional construct the aspect of satisfaction with the team performance on the side of team members. The following items will be used to operationalize the independent constructs: Items on creativity are designed out of the survey data (e.g., building on the novelty rating and creativity rating of ideas by team members and reviewers). The items related to conflicts, more specifically to task, interpersonal and process conflicts in addition to a total are designed building on Jehn et al. (1997). Communication effectiveness was added to the survey building on items proposed by Earley and Mosakowski (2004). Items to measure social integration are compiled of the survey, an example item is “I would like to continue to be a part of this team”. Finally, we will build on Clark and Brennan (1991) when it comes to the operationalization of media richness for which we have designed a set of new questions. Cultural intelligence will be operationalized by two different instruments, the BCIQ (Alon, Boulanger, Meyers, & Taras, 2016) and the CQ-Scale (Ang et al., 2007). A full list of variables used can be requested from the corresponding author.

To analyze the data, we will make use of a structural equation modeling approach using SmartPLS (Ringle, Wende, & Becker, 2015). The contingency effects will be analyzed using either multigroup analyses or interaction models.

Currently, we are in the process of data cleaning and preparation to start the analysis. Necessary literature reviews have been conducted and a manuscript draft is in progress.

Jehn, K. A., Chadwick, C., & Thatcher, S. M. (1997). To agree or not to agree: The effects of value congruence, individual demographic dissimilarity, and conflict on workgroup outcomes. International Journal of Conflict Management, 8, 287-306.